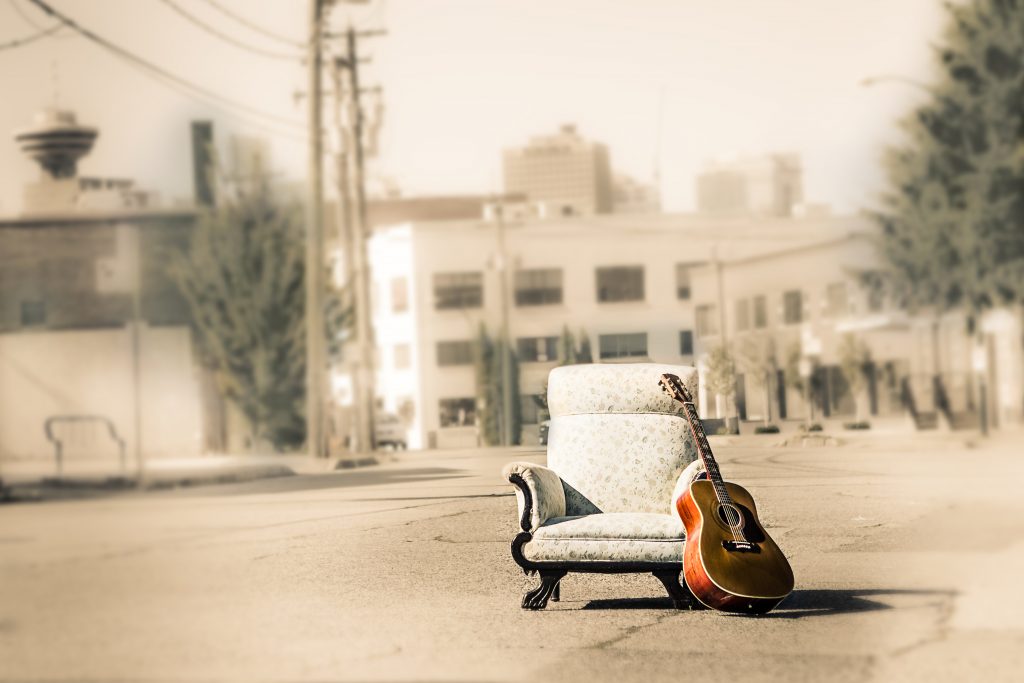 You never know where life is gonna take you…

For 34 years I have played guitar.

I graduated high school and within two weeks I was “on the road”, in a beat to crap van, playing crappy bars, breathing in crappy cigarette smoke and playing crappy music.

Every minute. Every Note. Every chord. Every song.

Somewhere along the way my band got really good. We became the house band at the world famous Roxy night-club. We played corporate events. We were flown to shows. And we played venues and stages where I watched my heroes do the same before me.

And then others came calling.

I became the “official guitar player” for a Canadian Country singer who is probably the best singer I have ever heard. Like, ever.

I built a recording studio in my home.

I was nominated for a producer of the year award with a local music association.

I flew to Nashville once a year. I networked. I shook hands. I kissed babies.

And I wrote and recorded personal music on a project with one of my very best friends.

And all of this was happening while I maintained my day-job. A day-job which, to this day, I still love.

Life was good. Life was busy…like, uber busy…but, it was good. As a “semi-professional musician” I really couldn’t have asked for more.

One night in 2015 I came home from a show and I told Kelly I couldn’t feel my right leg. It felt like my leg had fallen asleep.

This carried on for two weeks.

I went to the doctor.

Over the course of 9 months I went to a Neurologist, MRI appointments and eye tests. During this 9 month period my vision became compromised and I also started to lose sensation in my right hand.

God bless the guys in my band. If they noticed any mistakes or differences in my performances, they sure didn’t say anything. But, I noticed. I noticed a decline in facility on my instrument.

And then…in February of 2016…I was diagnosed with Multiple Sclerosis (MS). (Insert needle-scratching-on-a-record sound effect here).

Now, everyone deals with something like this in their own way. The details are not important but I can tell you I went through that whole Kubler Ross thing. You know, the five stages of something thing. I spent a lot of time in the “bargaining” stage. For a long time I referred to my diagnosis as “the alleged MS”.

But, after that, I got to acceptance. And I got there pretty quick. For reasons I’ll never know or be able to explain, I accepted it.

And I think that’s the whole point of this long, rambling post.

So, I slowed down.

I passed go, I collected my 200 dollars and….I slowed down.

I focused on health.

I put down my guitar.

And then, the hardest decision of all, the most difficult thing I’ve had to do in all of this, reared it’s big fat, gut-wrenching, heartbreaking head.

I had to tell my band I couldn’t do it. I had to stop playing music.

My beloved brothers and sisters who I had shared a stage with for 23 years, my refuge of creativity and vulnerability….I had to say goodbye to.

Truth is, I was probably ready for a break. Anybody working a regular career while spending every weekend in a bar until 3am…is in need of a break.

And you know what? It’s ok.

After achieving a “new normal” I’ve been able to become very intentional with my decisions.

I’ve “self actualized”, whatever that even means, but my counselor uses the term and I thought it sounds smart.

I took up CrossFit.

I learned how to cook a really good cast-iron skillet steak.

I bought a Volkswagen Van.

And I got to spend weekends with Kelly.

And I got to watch Jacob from across the room….watch him make decisions and move towards the kind of person he will be. And it’s a good one.

And, because of some unbelievably serendipitous and supportive circumstance with my day career, I’ve picked up photography. As a “creative” I need to scratch that itch. And photography is now providing that for me.

I still play music. I just do it in a much more intentional and meaningful-to-me way. And the bonds with my band mates have become even stronger.

All this is to say, if you are going through something….anything…I encourage you to just slow down. Sit still for a while. Reevaluate and “self–actualize”.

You never know where life is gonna take you.